A day at Cité Equestrian Park

On Thursday, I spent the day with four of my favourite people in the whole wide world, Zahra (12), Maryam (11), Zainab (9) and Khadeejah (8) at Pony Camp in Cité Equestrian Park.

Our day started at 7am when Maryam woke me up (I’m really not a morning person). We packed snacks and were on the road  to make the 30km trip. The girls were really excited because we aren’t the crew that usually spends time together (age difference, I guess?).

We reached the farm and it felt like we were no longer in Gauteng. Lots of trees, blue skies with fluffy white clouds and the sun was shining for the first time in almost two weeks. The farm looked like a picture you would see on the back of a postcard.

The Pony Camp began with exercises to get our hearts racing. Star jumps, lunges, squats and high knees. Why is there so much of barkat (blessings) in gym seconds? Thirty seconds of star jumps makes me feel like I did three minutes of it.

After getting paired up (Hello, Zainab) we had to clean the stables. When I say clean the stables, I mean we had to pick up horse poop with our hands and put it in bags. To say I found it difficult is an understatement. I mean, when we went on matric camp, I got an award for expecting camp in Drakensburg to be a five-star holiday (but to be fair, all I wanted was a nice bed with fresh, crisp white sheets like Southern Sun Elangeni). We had to refill the horse’s water and then we could take a snack break. I was really proud of myself for actually finishing this task.

My aunt fried savouries and made sandwiches for us so I sat with the girls in the car and ate. The reason we didn’t sit outside was because we were scared that if the dogs on the farm saw the food, they’d come to us.

Afterwards, we took a short hike up the mountain to fetch some of the horses that we were going to ride as they were grazing there. While waiting for everyone to get their horses, the instructor asked one of the kids how many horses she has on her farm and she replied “209”. Another kid comments “oh so you’re rich.” This little girl had no filter and it was honestly the cutest thing. The innocence of a kid is unmatched.

After we got our horses, it was time to finally ride them. This was my first time riding a horse but surprisingly, I wasn’t scared at all. I swung my right leg over the saddle and settled (saddled? Sorry, lame pun) right in. At first, it felt a little weird as I wasn’t used to the sudden movements the horse made but after a bit, I felt right at home. We went for a half an hour outing in the mountains with our horses. My horse’s name was Jamaican and he was seventeen years old. He was the sweetest boy. Normally, they say you shouldn’t walk behind horses because they’ll kick you but not Jamaican. He was a huge brown beauty with big brown eyes. By the end of the ride, I was already hugging him and by the end of the day I was absolutely in love with him. This was surprising because I’m really not an animal person.

Once we were back from our ride in the mountain, it was time to give our horses a bath. We hosed down Jamaican, put shampoo on his mane, got the knots out of it, groomed his body and then it was time for him to dry off. All the horse wants to do after it has had a bath is roll over in the mud so to prevent this from happening, we had to walk them on the field until they were dry. It was lots of fun walking the horse by its reins. I loved seeing my little Khadeejah pulling her big horse and it was great to see Zahra who at first was scared of the horses, hugging hers after she walked it. We then took the horses back to their stables and with that Pony Camp was over for me and my smallies. 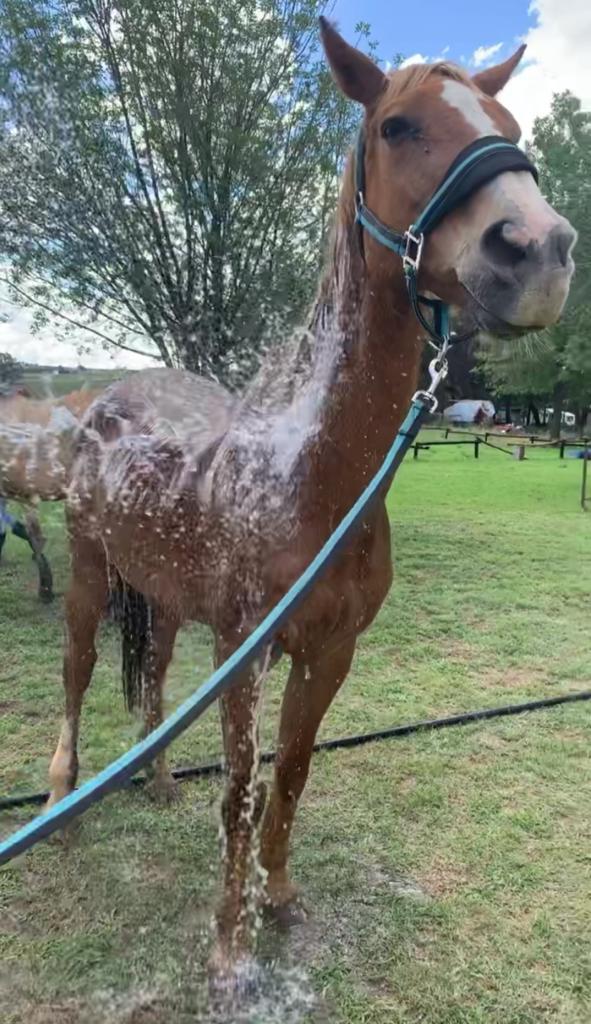 Jamaican getting hosed down

We ended the day with eating fondue at Häagen-Dazs and (a very late) lunch at Chiapas, Simply Asia and Chicken Licken. I gave the girls dessert before lunch but in my defence they said they weren’t hungry and I only realised they were after they ate the entire fondue in four minutes.

our fondue before we swiped it

I had the best day with my smallies, they really are excellent company but I was so tired after our long day, I ended up napping between maghrib and esha. You know you had a good day, when you come home and nap.

2 Comments on “A day at Cité Equestrian Park”